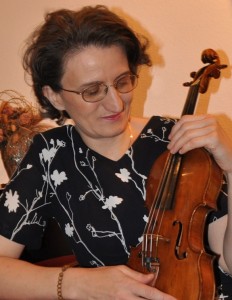 My ancestors were hardworking people achieving all that they did by their efforts and skills alone. My great-grandfather on my mother’s side had a book-printing and binding workshop in central Dresden, which was completely destroyed in the bombing of 1945.  Despite being in his mid-60s, he started all over again. His son, my great-uncle Walter, was less fortunate:  as a soldier in WWII he refused to kill, and was consequently killed himself. He remains a role-model for our family, and for me in particular, being the only professional musician (a cellist) from either side of the family. He lived his life following the principle: “Dem Streben nach Vollkomenheit sei meine ganze Kraft geweiht” (“All my strengths are devoted to the pursuit of perfection”) – which he left as a testimony to all his relatives in his last letter. For me, this became a most inspiring legacy to follow!

My love for classical music and literature I owe to my mother, who learnt to play the mandolin and violin. She had to work in her teens as a book-binder in her native Dresden to raise money to study literature and languages later on at the University in Leipzig. During that time she would take up every opportunity to attend live concerts, opera or theatre. So she got to know and love the works of the great masters in first-class performances in these great cities.

As a child I was surrounded by books and records to which mother dedicated every spare minute and in doing so completely enchanted me with their beauty. Thus reading and learning to play a musical instrument was a necessity for me, not a duty.

My grandfather on my father’s side had managed through his own efforts to build a saw-mill in Bulgaria, which, at the time when the communists first took power, was prospering very well. However, all was taken by the new proletarian government, including my grandfather’s life. The remaining family ended up in total disgrace and my father and his siblings were permitted to study nothing except, curiously, theology, which my father, being brought up in the faith, willingly did. Wanting to be a medical doctor he ended up helping people thanks to his voice and advice, working as a Church chanter till he turned 80. The censure, however, was carried over to us grandchildren, and, given this background, it was quite unbelievable that I was accepted as a student at the Specialist Music School in Ruse and then at the State Music Academy in Sofia. I studied there with remarkable teachers such as Anelia Popova, Boyan Letchev and Dora Bratchkova. Up until my graduation, I was not permitted to visit a Western country even as a member of the Academy orchestra. I was, however, allowed to visit my grandmother and relatives in Dresden, being in East Germany. Thus straight after graduating, I set off to the Weimar Seminar, and soon after was appointed principal leader of what is nowadays known as the Elbland Philharmonic Orchestra. I spent four years there during which I completed my Specialized Violin Teaching Qualification at the Hochschule für Musik in Dresden. During that time I gave many concerts in Germany and abroad, with my orchestra as well as with the “Deutsche Kammerakademie” and the International Youth Orchestras in Italy, and also as soloist and chamber musician. This was my most productive time. Alongside my musical activities I indulged in writing prose, poetry, chansons and articles, and set up a Charity for sick children - “Help for Bulgaria”. In this period I was also fortunate to meet the exceptional Russian violinist and teacher Grigory Zhislin. I went to London to study violin and viola with him as a postgraduate student at the Royal College of Music and fell in love with the city and the country. I later received a full scholarship for a year of advanced studies on the viola at the Guildhall.

Since then, life has continued to be very dynamic, seeing me focusing more on teaching and solo playing. I was privileged to assist Grigory Zhislin at the Royal College of Music for three years and am now teaching at the Trinity Laban and Birmingham Conservatoires, at the London College of Music and at Goldsmiths, University of London. Masterclasses have taken me as far as Taiwan and Hong Kong where I have also performed.

It seems as though I have been compensating for all my relatives, who were prohibited from studying: I went on to complete a second higher degree and a Masters at Sofia University, followed by a PhD at the University of West London, which I completed in 2008.

My family history has turned me into a vindicator of the distressed and suffering. A sense of justice and fairness was implanted in me from birth and I therefore always wanted to dedicate my skills to the service of people suffering inequality. Thus one of my favorite activities has become my involvement in Live Music Now, providing live classical music to disadvantaged people. I am glad that I have managed to carry on this mission wherever I have been touring and in 2010 to have started a similar program in Bulgaria. I continue to give educational and social concerts, reaching audiences that would otherwise not have access to live classical music.

My interests extended to organising concerts, workshops, seminars, masterclasses, competitions, charity events and mixed cultural events combining different art-forms such as music and poetry, paintings and theatre. Alongside these, I run a charity supporting young violinists and children with Diabetes as well as other projects supporting the elderly and helping young people to discover the beauty of classical music, literature and art.

I love my work and it is my best entertainment.